Free shipping on all orders over $80*

Pain Relief Gel is rated 5.0 out of 5 by 1.
For muscles and joints. Read More
Always read the label and follow the directions for use. 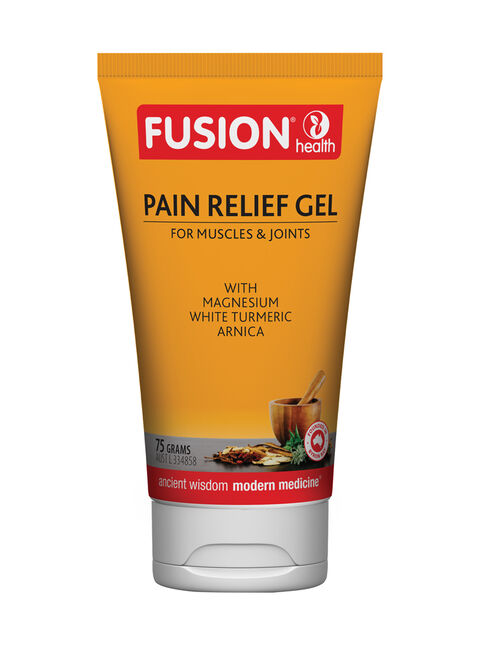 Pain Relief Gel
For muscles and joints.
Always read the label and follow the directions for use.

Fusion Pain Relief Gel is a non-greasy gel that’s readily absorbed into the skin so it’s easy to apply to the muscles and joints. It contains the following herbal ingredients in a base that includes magnesium.

In Chinese medicine, pain is believed to occur when blood is unable to flow freely around the body; white turmeric is traditionally applied to affected areas to promote healthy circulation and get the blood moving as it should.

Arnica has been used topically since at least the 16th Century in Western herbal medicine, where it’s traditionally applied to relieve symptoms of painful sprains and strains, and mild joint and muscle inflammation1.

Menthol is a naturally occurring substance found in peppermint and some other members of the mint or Mentha genus of plants2.
It has a cooling effect when applied to the skin, initially stimulating pain receptors in the area and then desensitising them (reducing their sensitivity or ‘turning them off’). As a result, it relieves inflammation and decreases mild joint and muscle pain and soreness.

Wintergreen is a shrub that grows in North America. Its oil has a pleasant aroma and is rich in a compound called methyl salicylate, which is related to salicylic acid3,4.

Adults: Massage a thin layer into affected area(s) up to four times a day.

Do not use on broken or damaged skin.

For external use only. Contains methyl salicylate. Contains ethanol 20%(w/w).

Do not use this product if pregnant, likely to become pregnant, breastfeeding or in children 6 years of age or less.

If you have sensitive skin, test this product on a small area of skin before applying to a large area. If irritation develops, discontinue use. Avoid contact with eyes.

If symptoms persist, talk to your health professional.

Store below 30°C. Do not use if the seal on the tube is broken. Keep out of reach of children.

You Might Also Like
Rated 5 out of 5 by Erika from Good pain relief It seem to have helped with muscular pain. Both my hubby and I've been using it