Read More
Always read the label and follow the directions for use. 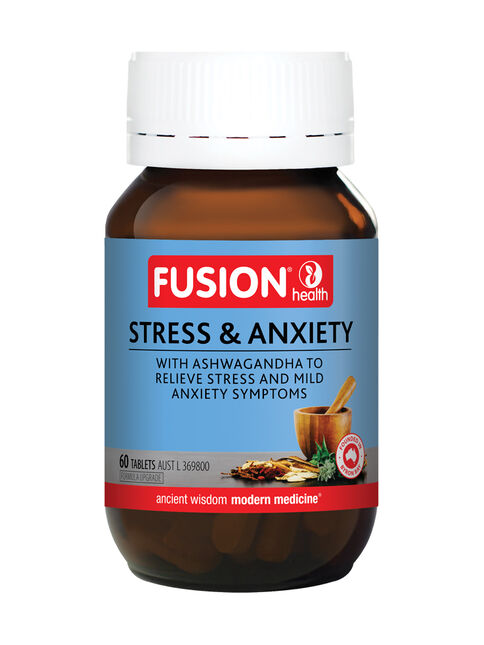 Fusion Stress & Anxiety features a highly concentrated extract of the herb ashwagandha called KSM-66®, which provides relief for symptoms of stress and mild anxiety and enhances the body’s ability to adapt to stress.

Fusion Stress & Anxiety features a highly concentrated extract of the herb ashwagandha called KSM-66®, which provides relief for symptoms of stress and mild anxiety and enhances the body’s ability to adapt to stress.

Ashwaganda is an Ayurvedic (Indian) herb also known as withania. In addition to its use for relieving symptoms of stress, ashwagandha is traditionally used as a rejuvenating tonic and an adaptogen to enhance the body’s ability to adapt to stress in Ayurvedic medicine.

In traditional Chinese medicine (TCM), the herb polygala is traditionally taken to decrease symptoms of mild anxiety as well as to calm both the mind and spirit (called shen). It’s also traditionally used in TCM to assist a relaxed state of mind and relieve restlessness and irritability.

Citrus peel is an herb traditionally used in Chinese medicine for its benefits in both improving digestive weakness and regulating qi (vital energy) to relieve abdominal bloating and feelings of fullness, nausea and burping.

Recommended dosage:
Adults: Take 2 tablets one to two times a day, or as professionally prescribed. Take with food.

OciBest® is a trademark of Natural Remedies Pvt. Ltd. KSM-66® is a registered trademark of Ixoreal Biomed Inc.

If symptoms persist or you are unsure if this medicine is right for you, talk to your health professional. Do not use during pregnancy or breastfeeding. Contains lactose and galactose. Contains potassium (12.9mg per tablet).

You Might Also Like
Rated 5 out of 5 by Kristie from Stress & anxiety fusion health Fusion stress & anxiety tablets are really effective for my anxiety, I can certainly tell a difference if I run out. I highly recommend them.
Rated 5 out of 5 by Pat C from The brand for Stress & Anxiety that runs marathons During these trying times, Fusion Stress & Anxiety has been an absolute saviour. I've tried many brands/tablets, that state they help ease anxiety, but none have worked the way Fusion Stress & Anxiety have.
Rated 5 out of 5 by Jadeb from Helpful and reliable product! Really effective! I've been buying this product for a few years now. I've struggled with anxiety and this product has really helped me on those stressful days. Recommended!
Rated 5 out of 5 by Magdalena from Stress and anxiety supplement These actually work!! Very happy with the purchase. The supplement tablets reduce stress and anxiety.