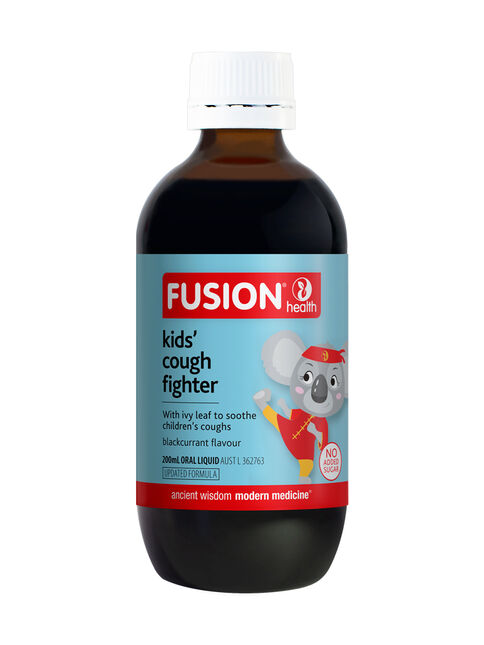 Coughing is the body’s way of clearing unwanted matter from the lungs and lower airways. Coughing and bronchial mucous congestion are common symptoms in children.

Coughs that cause mucus (also known as phlegm) to be expelled or expectorated from the airways are sometimes referred to as wet, loose or productive. This type of cough may be worse at night, because when the child lies down, mucus drips from the upper respiratory tract (e.g. nose and sinuses) into the lower airways, triggering the cough reflex as the body tries to expel it.[1]

On the other hand, coughs that don’t trigger the expectoration of mucus are referred to as dry or non-productive. These types of coughs sometimes persist for longer periods of time. They are also sometimes characterised by spasmodic bouts of coughing.

Fusion Kids’ Cough Fighter is suitable for children aged 2 to 12 years and combines herbs traditionally used in TCM and Western herbal medicine, as detailed below.

Ivy leaf decreases coughing in children and is used as an expectorant to clear mucus from the respiratory tract.

Balloonflower is traditionally taken in Chinese medicine to relieve both cough and symptoms of a sore throat in children.

When should your child see a health professional for their cough?

Most children’s coughs are mild and of short duration, however severe or persistent coughs may indicate underlying health problems that need professional investigation and/or treatment.

See your doctor or health professional if your child has a cough that is:

Not to be used in children under 5 years of age without medical advice.