$32.95 - $48.95
Energy is rated 5.0 out of 5 by 1.
With Korean ginseng, traditionally used to promote energy and help manage fatigue in Chinese medicine. Read More
Always read the label and follow the directions for use. 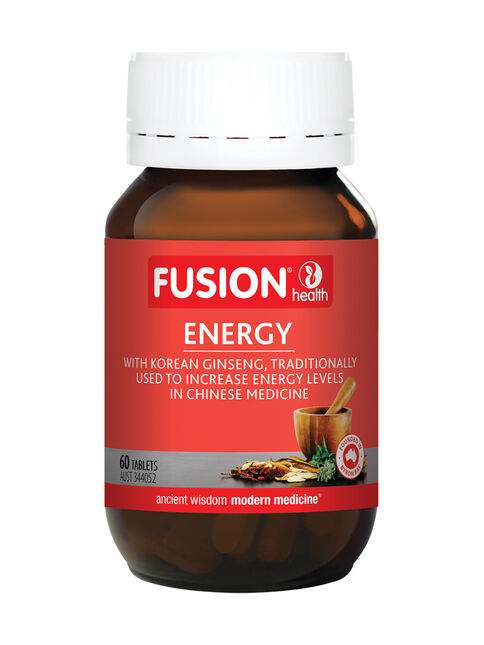 Energy
With Korean ginseng, traditionally used to promote energy and help manage fatigue in Chinese medicine.
Always read the label and follow the directions for use.

Also known as ‘Ren shen’, Korean ginseng is one of the most prized herbs in Chinese medicine where it’s traditionally used for the relief of fatigue and for promoting energy levels, while at the same time enhancing vitality and physical endurance.

Korean Ginseng is also traditionally used in TCM to calm the spirit and as an adaptogen – in other words, as a herb that helps the body to adapt to stress. It also supports healthy mental function.

In Chinese medicine, the word Qi (pronounced ‘chee’) describes the energy or life force that flows throughout your body, giving you the capacity to respond to your environment and the ability to move, think, breathe, digest food, and experience everything that life has to offer.

Korean ginseng is traditionally taken to replenish healthy Qi (and consequently to support health and wellbeing) in Chinese medicine.

Reishi is a woody mushroom that’s highly regarded in Chinese medicine, being traditionally used to nourish both the Qi and blood to relieve fatigue.

Recommended dosage:
Adults: Take 2 tablets in the morning and 1 tablet at midday, or as professionally prescribed. Take with food.

You Might Also Like
Rated 5 out of 5 by Youthful Spirit from Fusion Energy I had been concerned about the change to the Formula but so far so good. Glad it is back on shelves