$30.95 - $49.95
Allergy is rated 5.0 out of 5 by 1.
With baical skullcap, traditionally used to relieve mild allergy symptoms in Chinese medicine. Read More
Always read the label and follow the directions for use. 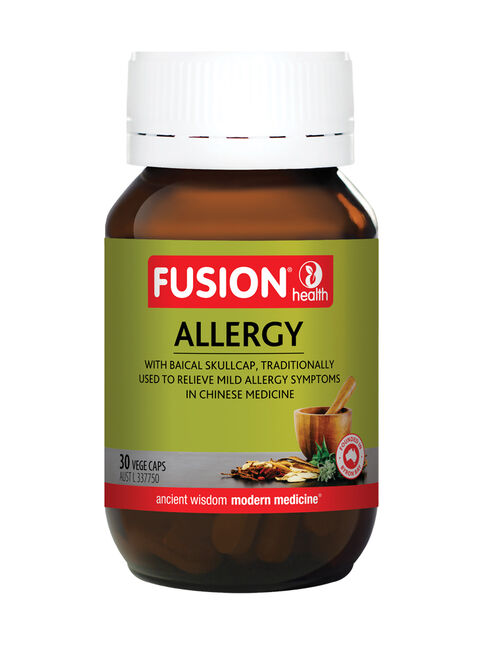 Allergy
With baical skullcap, traditionally used to relieve mild allergy symptoms in Chinese medicine.
Always read the label and follow the directions for use.

Allergies happen when the body reacts to a trigger, called an allergen, resulting in inflammation.

It’s estimated that one in four people in Australia are allergic to some sort of trigger or allergen.1

Baical skullcap is renowned in Chinese medicine for its traditional uses for the relief of mild allergy symptoms in healthy adults and for easing hayfever symptoms such as red and itchy eyes, runny and itchy nose and blocked nose.

Baical skullcap is traditionally regarded as having anti-inflammatory properties in Chinese medicine, where it’s often used alongside bupleurum to relieve inflammation.

Suitable for vegans and vegetarians.

Adults only. Do not use during pregnancy or breastfeeding. Do not use this product if you are taking blood thinning medication or have a pre-existing bleeding condition. Always read the label and follow the directions for use. If symptoms persist, talk to your health professional.

You Might Also Like
Rated 5 out of 5 by LC01 from Works well I suffer most of the year with allergies. When they are mild to moderate these tablets manage it well. I always keep these in stock, they definitely work.