$26.95 - $41.95
Sinusitis is rated 5.0 out of 5 by 1.
With white angelica, traditionally used to relieve sinusitis symptoms including sinus pain in Chinese medicine Read More 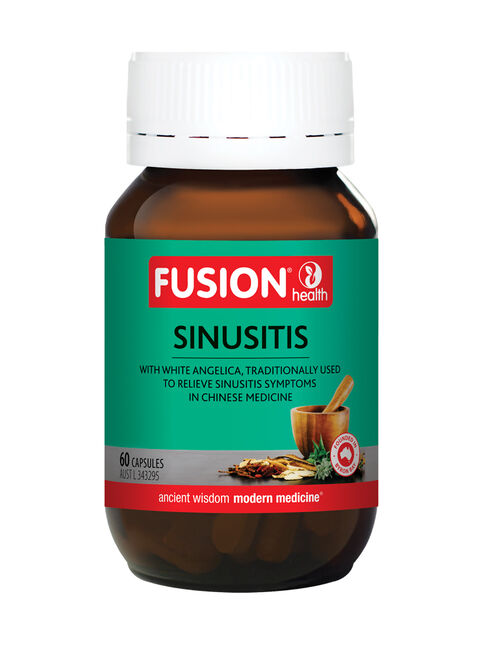 Sinusitis is a condition where the nasal sinuses (the hollow cavities in the skull within the cheeks and behind the nose) become inflamed or blocked. This could be as a result of having a common cold, or may be caused by allergies like hayfever (also known as allergic rhinitis.1

Fusion Sinusitis is based on a TCM herbal formula called Cang Er Zi San, which has hundreds of years of traditional use for sinusitis symptom relief.

White angelica is one of the primary herbs in the Cang Er Zi San formula. It’s traditionally used in Chinese medicine to help relieve symptoms of sinusitis including nasal congestion and sinus pain, and to unblock the nasal cavity.

Are you a hayfever sufferer? Many people who experience hayfever also experience sinusitis from time to time.1 Xanthium, another herb found in the Cang Er Zi San formula is traditionally taken in Chinese medicine to relieve hayfever symptoms.

Xanthium is also traditionally used to relieve sneezing and an itchy nose caused by wind-coldness in Chinese medicine.

Do not use during pregnancy or breastfeeding. Adults only. Always read the label and follow the directions for use. If symptoms persist, or you are unsure if this medicine is right for you, talk to your health professional.

You Might Also Like
Rated 5 out of 5 by Srini from Sinus in the past! I have been suffering from Sinus for years. Tried everything, nothing worked until I gave Fusion - Sinusitus a go. A great product that works! My sinus seems to be a thing of the past.