$30.95 - $80.95
Hair Tonic is rated 4.7 out of 5 by 6.
With dong quai, traditionally used in Chinese medicine to improve hair health by acting as a blood tonic. Read More
Always read the label and follow the directions for use. 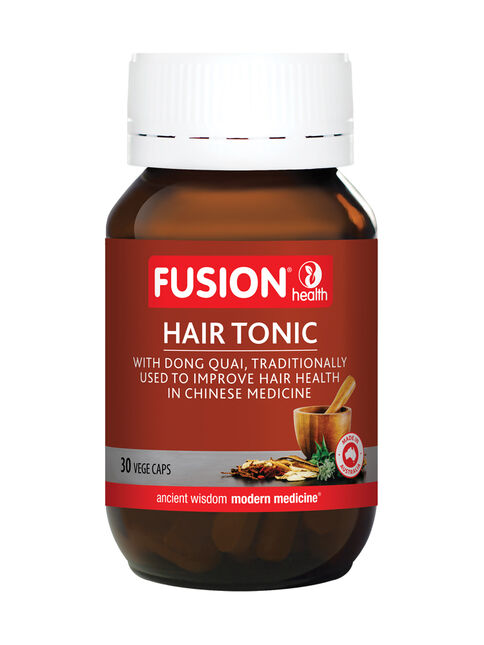 Hair Tonic
With dong quai, traditionally used in Chinese medicine to improve hair health by acting as a blood tonic.
Always read the label and follow the directions for use.

Our popular Hair Tonic is now better than ever, with a new improved formula.

Our popular Hair Tonic is now better than ever, with a new improved formula.

Fusion’s new improved Hair Tonic formulation is based on the traditional Chinese understanding of the role of the blood in the health of the hair.

In TCM, the hair is traditionally believed to be nourished by the blood, which keeps it shiny and healthy.

On the other hand, hair loss, thinning hair, poor hair health and an itchy or irritated scalp are often attributed to excess heat in the blood in TCM.

In TCM, dong quai is also traditionally regarded as having invigorating effects on the blood, improving its circulation to all areas of the body.

Up to 70% of men and up to 50% of women are affected by some degree of hair loss at some stage of their lives*.

Excess heat in the blood is regarded as a common cause of hair loss in TCM, and biota is traditionally taken to disperse the heat and help maintain the health of the hair follicles, which are the tiny dimples in the scalp that the hair grows from.

Got an irritated scalp?

When scalp problems are attributed to excess heat in the blood in TCM, biota is traditionally used to clear the heat from the blood and calm irritation.

Need nutritional support for your hair too?

Fusion Hair Tonic is suitable for use alongside Fusion Hair, Skin & Nails, which combines dong quai with silica, biotin and zinc – 15 nutritionals in all. Read more about the TCM Approach To Hair Health here.

If symptoms persist or if you are unsure if this medicine is right for you, talk to your health professional. Do not use during pregnancy or breastfeeding.

You Might Also Like
Rated 5 out of 5 by KLSH from Happy Customer Easy to use website, good pricing, quick delivery and I have noticed my hair is less frizzy. I will be continuing my use of this supplement.
Rated 5 out of 5 by Shell85 from Amazing and they actually work They are amazing and actually work. They are the only product that I have found that actually make my hair grow
Rated 5 out of 5 by LauraM from Hair Tonic I have always found FUSION products to be superior. I have tried any other products in the past and love how they kick they work. Now I have thinning hair and I have been taking the 'Hair Tonic' in conjunction with the FUSION hair, skin and nails and found a lot less hair in the shower after washing my hair. Definitely worth a try!
Rated 5 out of 5 by Ollie13 from Hair Loss I have tried many hair supplements over the years with limited success. After only one week of using Fusion Hair Tonic (2 capsules per day), I noticed a significant decrease in hair loss. Will staying on these for as long as necessary.
Rated 4 out of 5 by Kate1 from Too soon to tell Too soon to tell, but a friend recommended this to me for thinning post menopausal hair. Capsules are easy to take. Will review again in 6 months. Have been more than happy with other Fusion products.
Rated 4 out of 5 by Jordan Brown from Good so far Good…I think. Haven’t been using it long enough but so far, so good. Will re-purchase when I run out.